I think it has been well established at this point that 2017 was a banner year for gaming, but it was also a pivotal gaming year for me personally. This year saw my long awaited return to PC gaming. My most formative years as a gamer happened mostly on PC, so after years of being away, it has been great to be back. I thought the transition to Windows 10 was going to be hard, but really I am very happy with my setup and my machine.

On the console side, I went from playing all my games on PS4 in 2016, to this year playing only two games on the PS4. I ended up spending most of my time playing console games on the Nintendo Switch I didn’t even think I was going to buy (I actually thought I had cancelled my pre-order). I picked it up at midnight at launch and have enjoyed every moment I have spent with it. It has its quirks, for sure, but overall I have really enjoyed playing games on the couch or on the TV. I have also really enjoyed the emerging relationship between Nintendo and indie developers. The console is such a natural fit for so many of these games and it's great to see the catalog padded out with great titles both new and old.

So with the additional of two new platforms, it is safe to say that I played more games this year than any other year in my life. Not only in variety but in time as well. The first half of this year, personally, was very difficult so it was great to play some classic comfort games like Rocket League but also play the absolute barrage of new and awesome titles that we got this year. So without further ado, here is my top ten games of 2017.

I was really intrigued by Splatoon when I first saw it, but I never even entertained the thought of purchasing a Wii U, so I just let it go. When they announced Splatoon 2 for the Switch, I was really excited to check out everything that I missed as well as some of the new modes and features they added in for the sequel. This game has such great style: the art, the characters, and especially the sound design. It all melds together in such a pleasing way. You almost can’t reconcile the competitive cut-throat action with the presentation, which is a real accomplishment in my eyes. 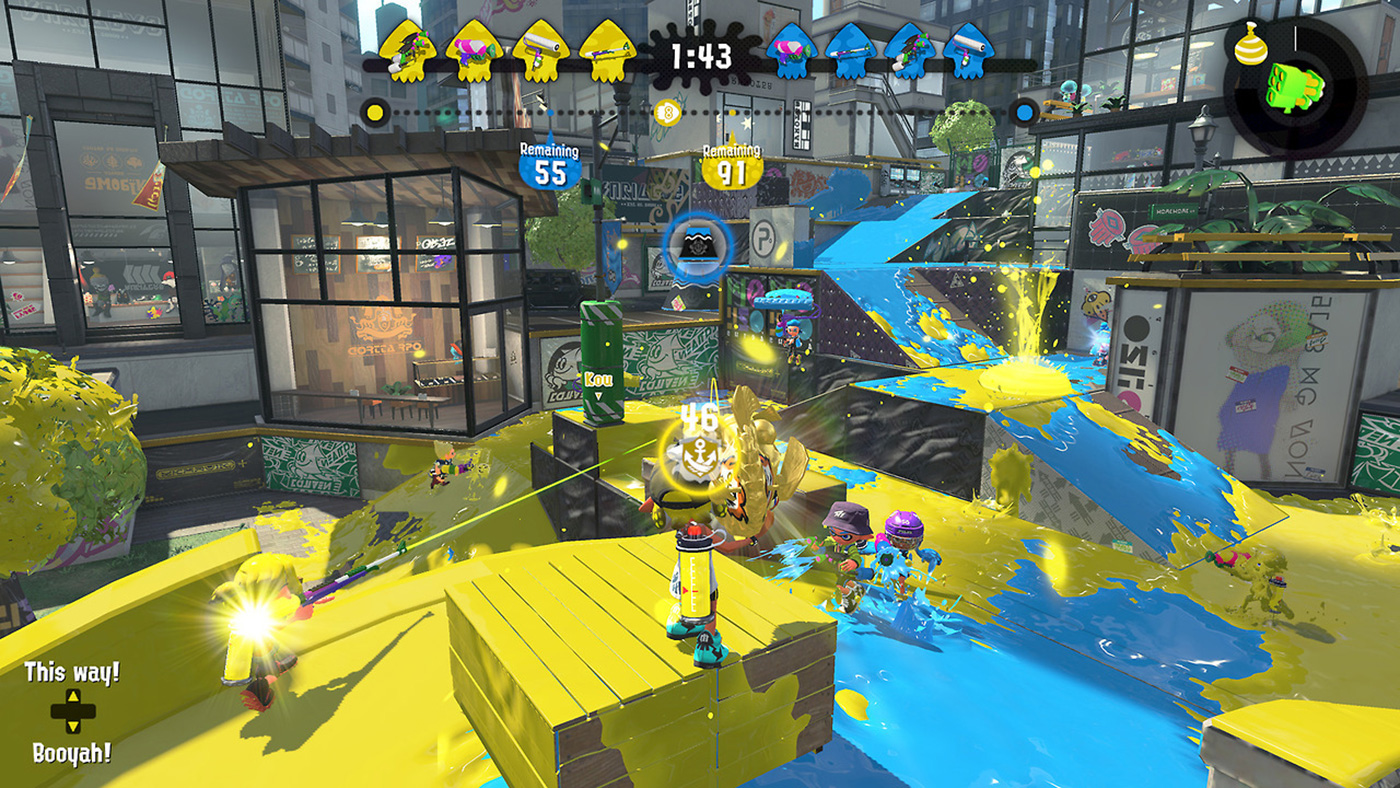 I have always been a fan of the pessimistic mustachioed former-plumber and was ready to mindfuck every living creature I could after seeing the preview for Super Mario Odyssey. While the game didn’t deliver on every front I was hoping for, I had so much fun playing this game while vicariously experiencing it through my two young daughters. The exclamation of sheer jubilation every time we found a new heart was worth the price of admission alone. Also, that great flinging sensation of the needle-nose bird guy was so satisfying. 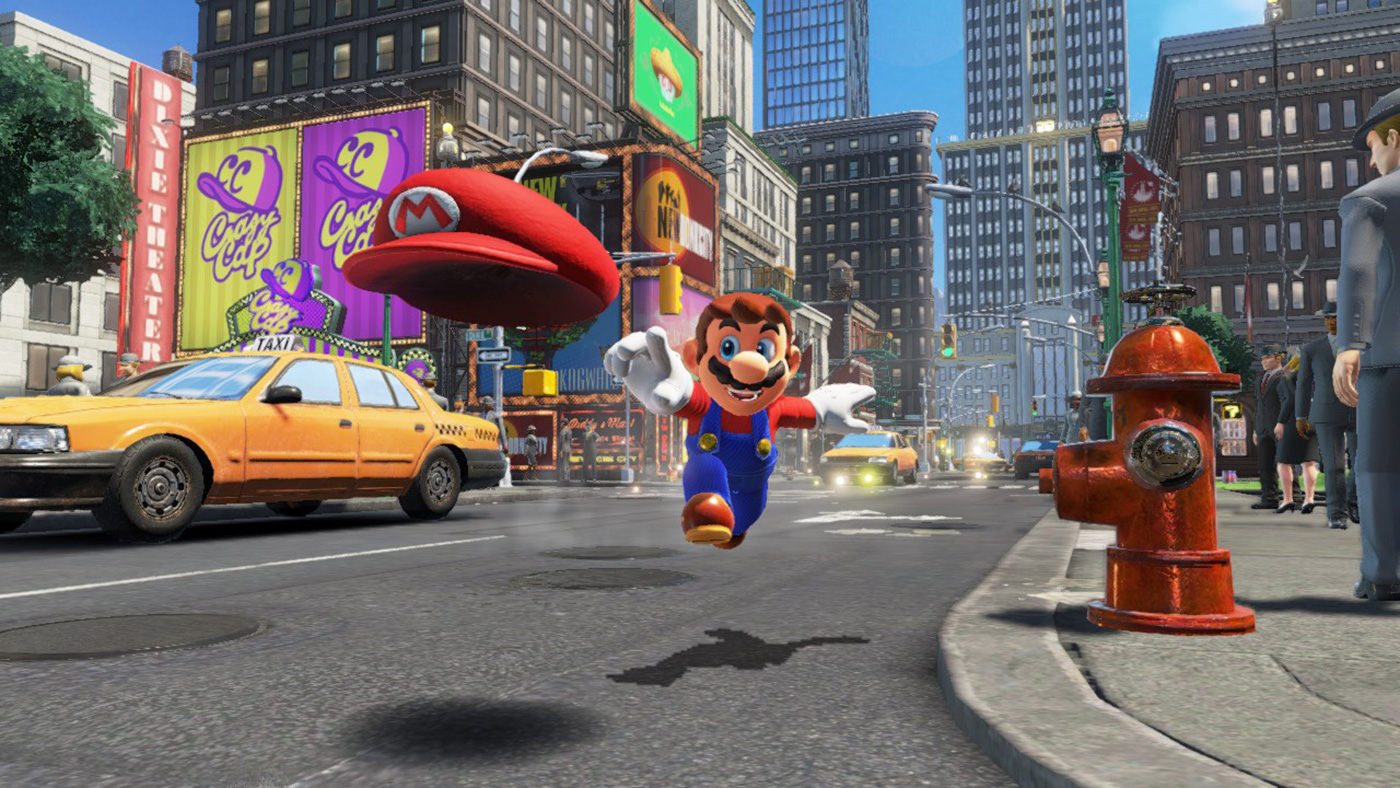 I have strong memories of playing Links with my dad on our big green Acer when I was a kid. My dad isn’t a gamer but he is a die-hard golfer and was willing to bridge that gap with a round of Harbor Town. Everybody’s Golf is the most fun I have had playing a golf game since childhood. Somehow Clap Handz managed to merge a goofy, over the top aesthetic with an extremely solid golf game. I still crack up every time some idiot stands right in front of a tee shot, asking for the sweet sweet release of death by way of a 280 yard drive off their skull.

I also really appreciate how accessible they made the local versus mode. I could max out my kids clubs and skills so that it is much more forgiving for them, while playing with my characters single player stats. I don’t think they would have enjoyed it all if that wasn’t possible. They did really like the character creator (which is excellent) and the customization as well but that will only carry a game so far. 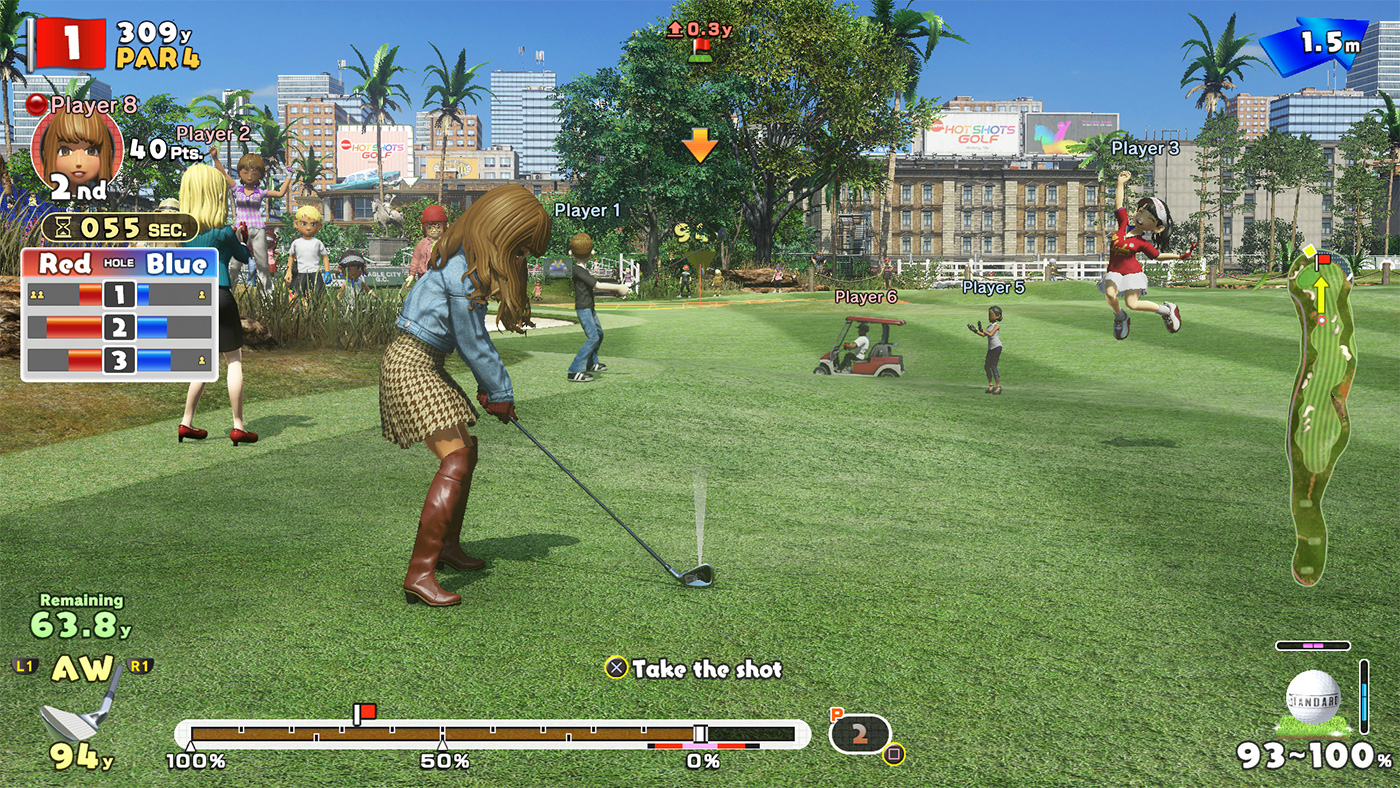 For two years in a row, EA Sports has managed to deliver an engaging story that somehow transcends what we know about the sports genre. This was the first year that I bought an entry in a sports franchise in consecutive years; not even my beloved baseball has managed to achieve that. Even better, I was rewarded with another great entry in the Alex Hunter saga complete with more surprising moments and actual character relationships that I thoroughly enjoyed. 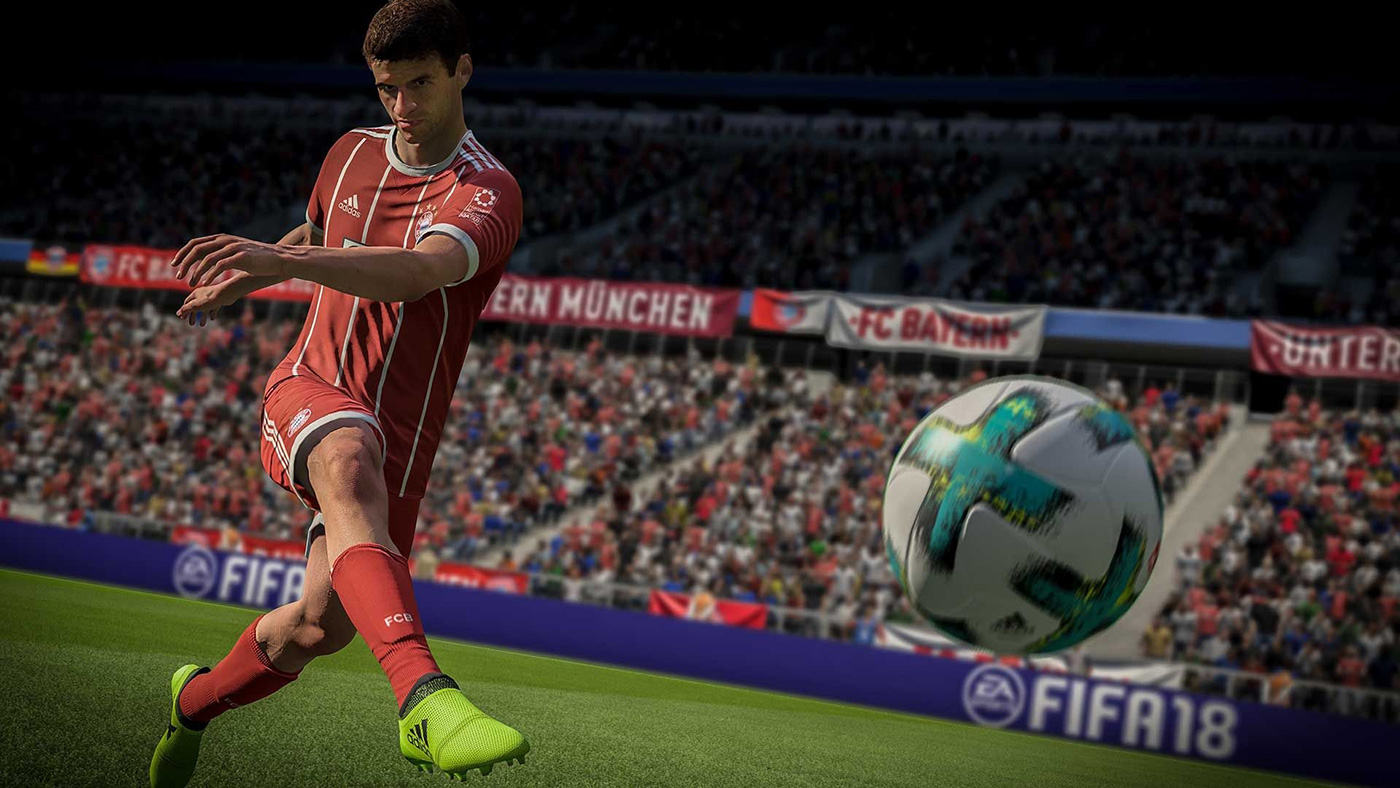 I cannot quite remember the sequence of events that led to me trying out this year's run away commercial success. I know stories of the game kept coming up during the Night Force Action Report and maybe it was just curiosity that finally got the better of me, but I decided to give it a go. I also knew it would be better with some mates and ended up buying Coop a copy as well so we could all enjoy it. After 100 hours, countless Thursday gaming nights, and one scrumptious chicken dinner, I can report that PUBG was well worth the sixty dollars. There are so many great clips and moments that it is no mystery why people are drawn to this game. I will be curious where PUBG goes in 2018 and will definitely keep it in my rotation. 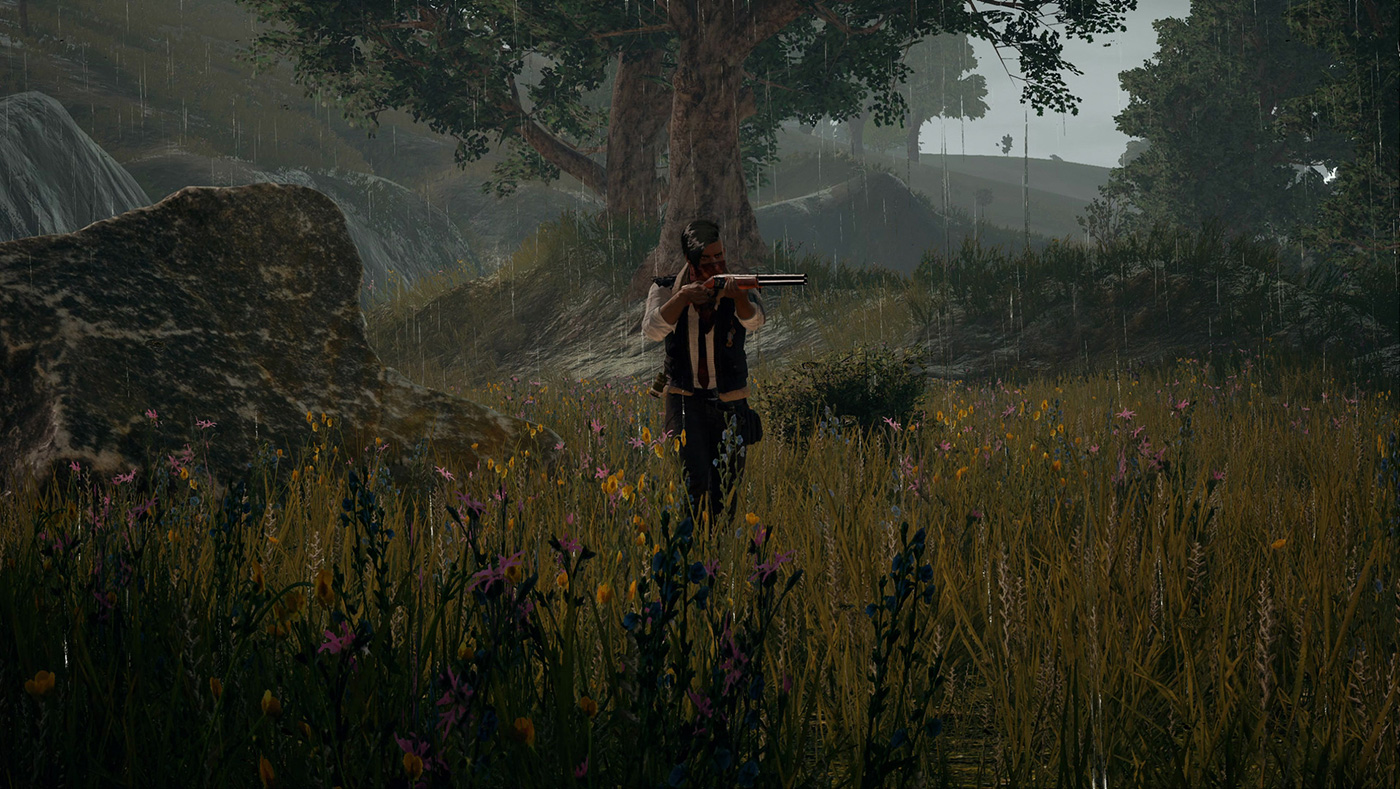 I missed Wolfenstein: The New Order when it was released. I think at the time I confused it with Return to Castle Wolfenstein and honestly couldn’t understand why everyone was so excited about it. When the sequel was announced I decided I better play the first one, which many people on Horrible Night raved about, before I committed to playing the sequel. It was fantastic and I was in on the sequel.

Having the memory of the original game, which was released three years prior, fresh in my mind made playing the second entry even better. I was ready to keep adventuring with this rag tag bunch of misfits and kill a whole lot of Nazis. The New Colossus was that, but it was also a lot more. There were some deep moments where we got to see some of the torment that defined the man known as “Terror Billy.” The new additions to the ever growing roster of the resistance were welcome, adding even more depth. Hopefully, we won’t have to wait another three years for the next and possibly final entry of this excellent iteration of Wolfenstein. 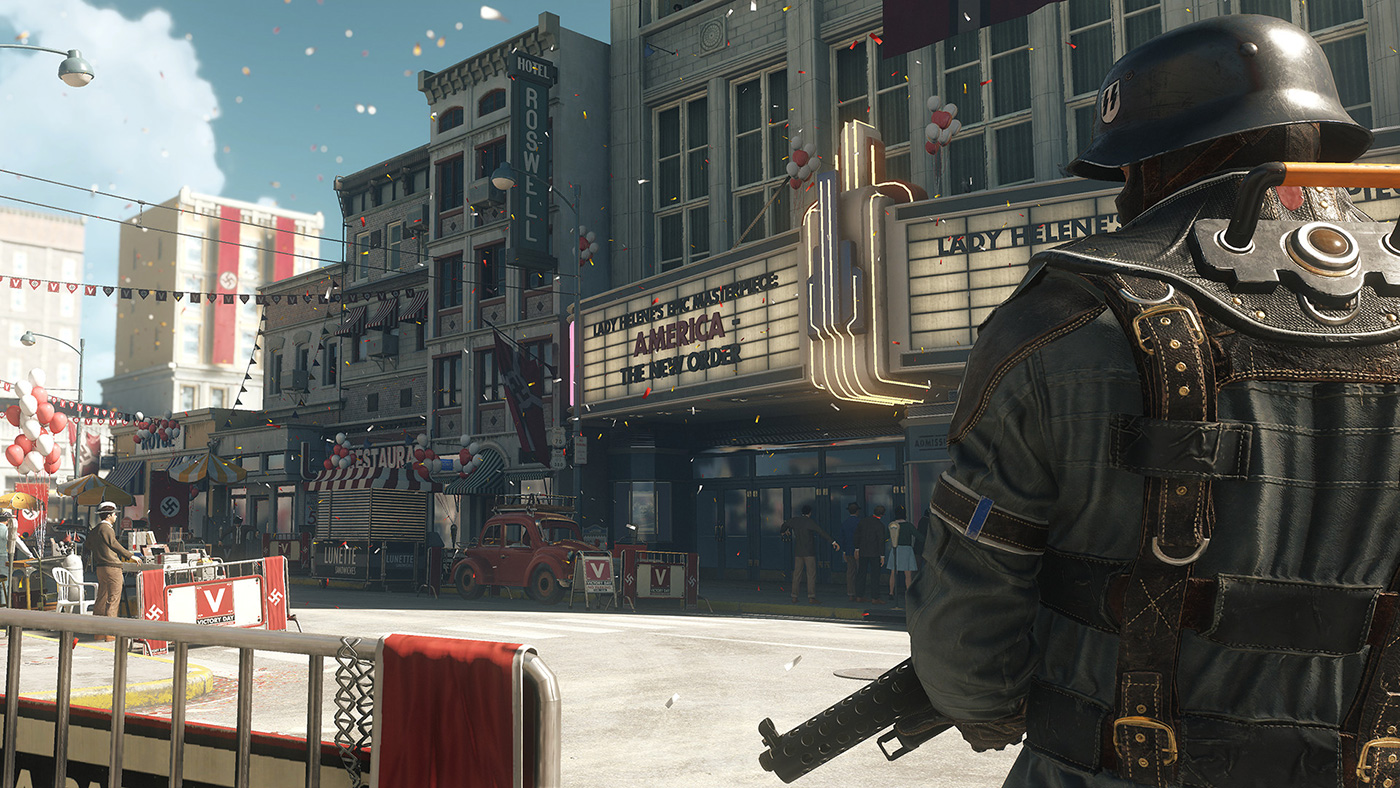 I am pretty sure I said I wouldn’t be playing Assassin’s Creed Origins at some point on some podcast. Turns out I was really wrong about that. Not only did I play it, but I loved it. Egypt was a blast to run and jump around. Climbing felt amazing. Bayek, a Medjay, a protector of Egypt, was a badass with an infectious grin. Perhaps my favorite part of this game was being able to zone out and inflict some justice on some mouthy Romans who thought they owned the street. My predator bow had a thing or two to say about that. 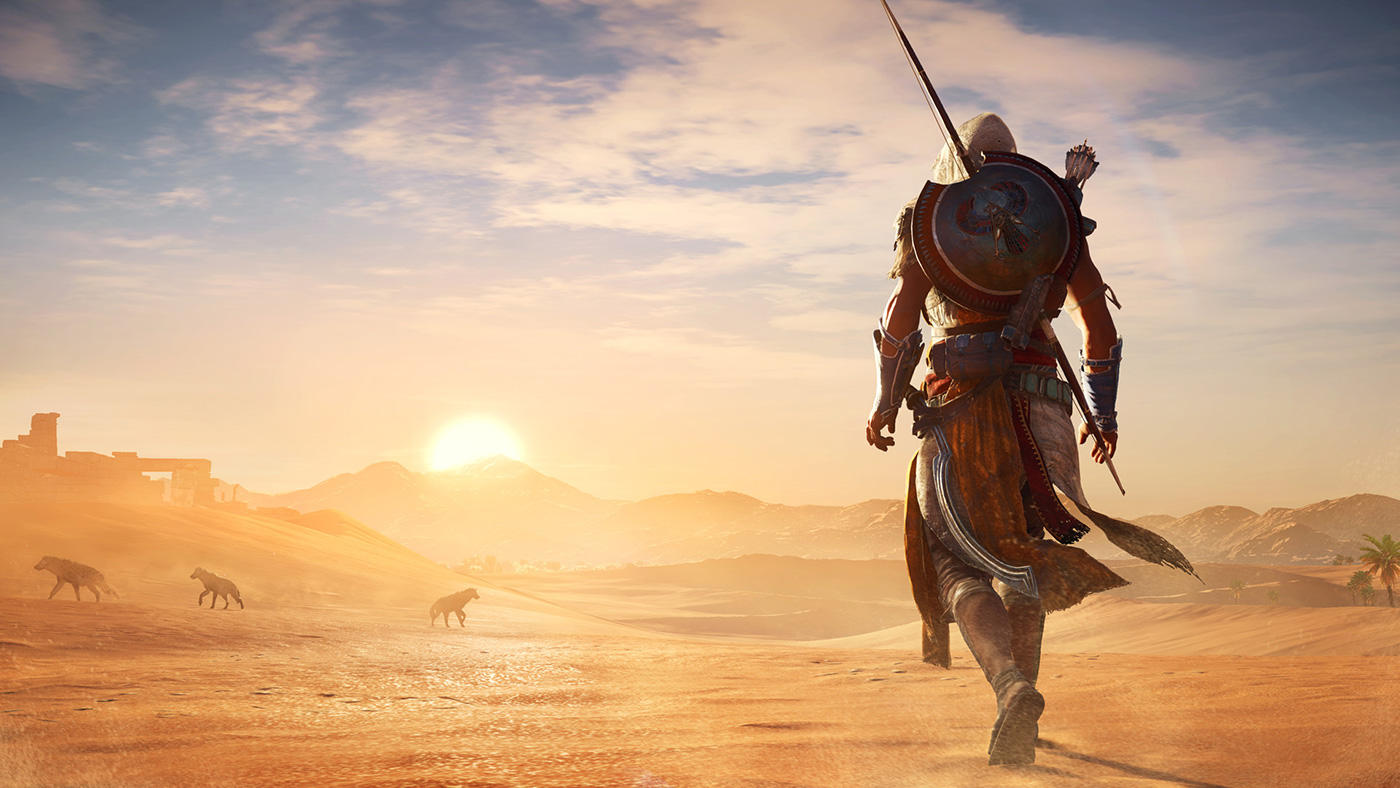 3. The Legend of Zelda: Breath of the Wild

Staring out over a beautiful, majestic, cell-shaded vista, taking in this beautiful world. Sprinting toward the edge, jumping into the abyss. Flying, soaring, the wind rushing by, descending gently toward the ground. Repeat endlessly. 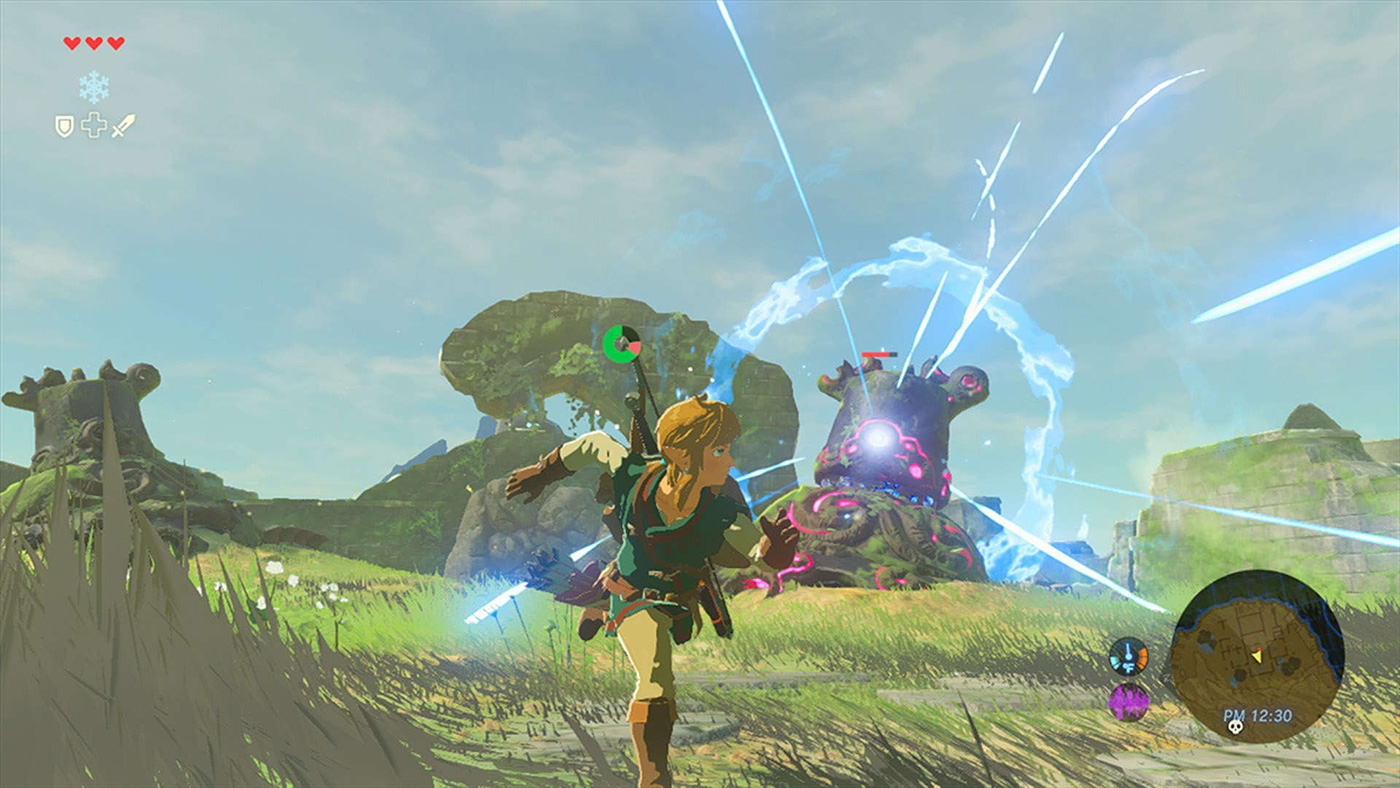 I was excited about a lot of games this year, but perhaps none more than Horizon Zero Dawn. I took release day off so I could spend some serious time with my new friend Aloy. After that day, I was convinced that nothing would top it for game of the year. The story was mesmerizing, a mix of tribal and sci-fi tech, the combat sublime. I love Aloy and still can’t believe how amazing Ashly Burch was voicing her. I can’t remember a game where hidden messages in a level meant so much to me. The combat was varied and fluid, giving you so many options of how to approach a number of different scenarios. The machines were incredible. The design was amazing, the variation from machine to machine kept each encounter diverse, and there was an immense sense of accomplishment taking them down.

I look forward to getting back to the world of Horizon and playing the DLC at some point this year and will certainly be interested where this new property is going to go in the future. 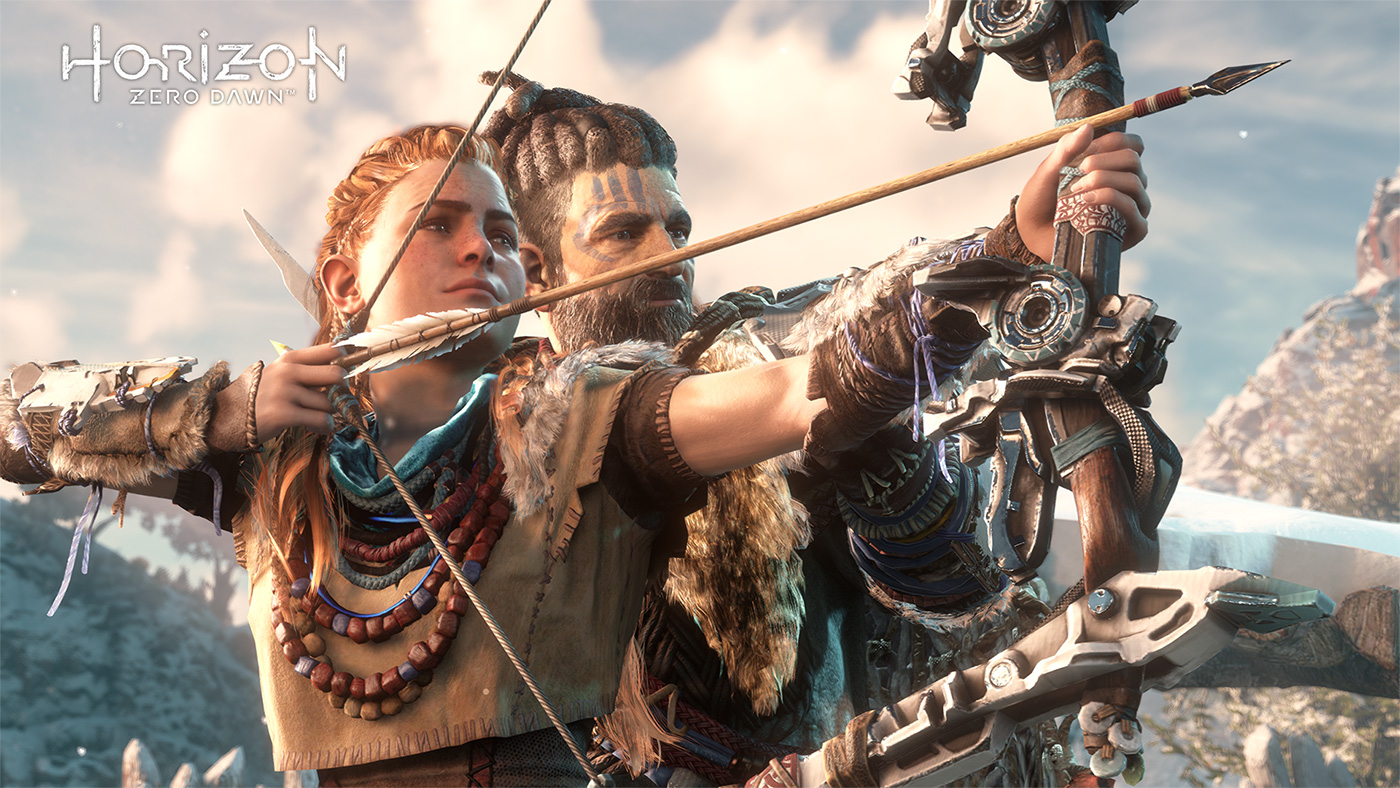 I had never heard of Nier or Drakengard or any of it when I decided to play the demo of Nier: Automata on the PS4 a year ago. I think I was just browsing the PlayStation Store and saw it was free and gave it a try. I thought the demo was really interesting, this cool mix of an action RPG, blended with a shmup, blended with a twin stick shooter. I noted that I should check it out when it was released and didn’t think much about it.

I don’t even remember when I purchased the game. I decided to go with the PC version because I figured it would be the best looking version of the game. That turned out to be problematic as the PC port was plagued with issues from launch and many to this day. I think that soured my mood on the game and there was so many other games to play, I again filled away Nier for some other time.

Then one day, Coop of all people, started talking about how great Nier was. Coop would be one of the very last people who I would expect to get excited about a Japanese ARPG, but there he was, singing the games praises. I didn’t get it. Could this really be true or was this just a first brush with Japanese storytelling and the uniqueness of that experience? I decided that I needed to get through the game so I could make sure and have an informed opinion but also to be a check against any knee-jerk reactions.

Once I finished the game, I realized that Coop had been absolutely right all along. This game really took hold of me and after it was done, I did not know how to move on. I think I listened to the soundtrack for a week, just constantly, trying to keep every detail in my mind. Every sticking point I had when I started the game had faded away, meaningless and trivial against characters and a story that was like nothing else I had played, certainly this year, if not ever.

Nier is a hard game to talk about. It is hard to put into words for someone who hasn’t experienced what you have experienced. It is hard to explain why those androids meant so much. It is really hard when you don’t want to spoil the surprises and twists for anyone. It will be hard to talk about it during the Grimmys knowing some people may have not finished or even started the game. I implore you to do it before we talk about it because it really is something special. 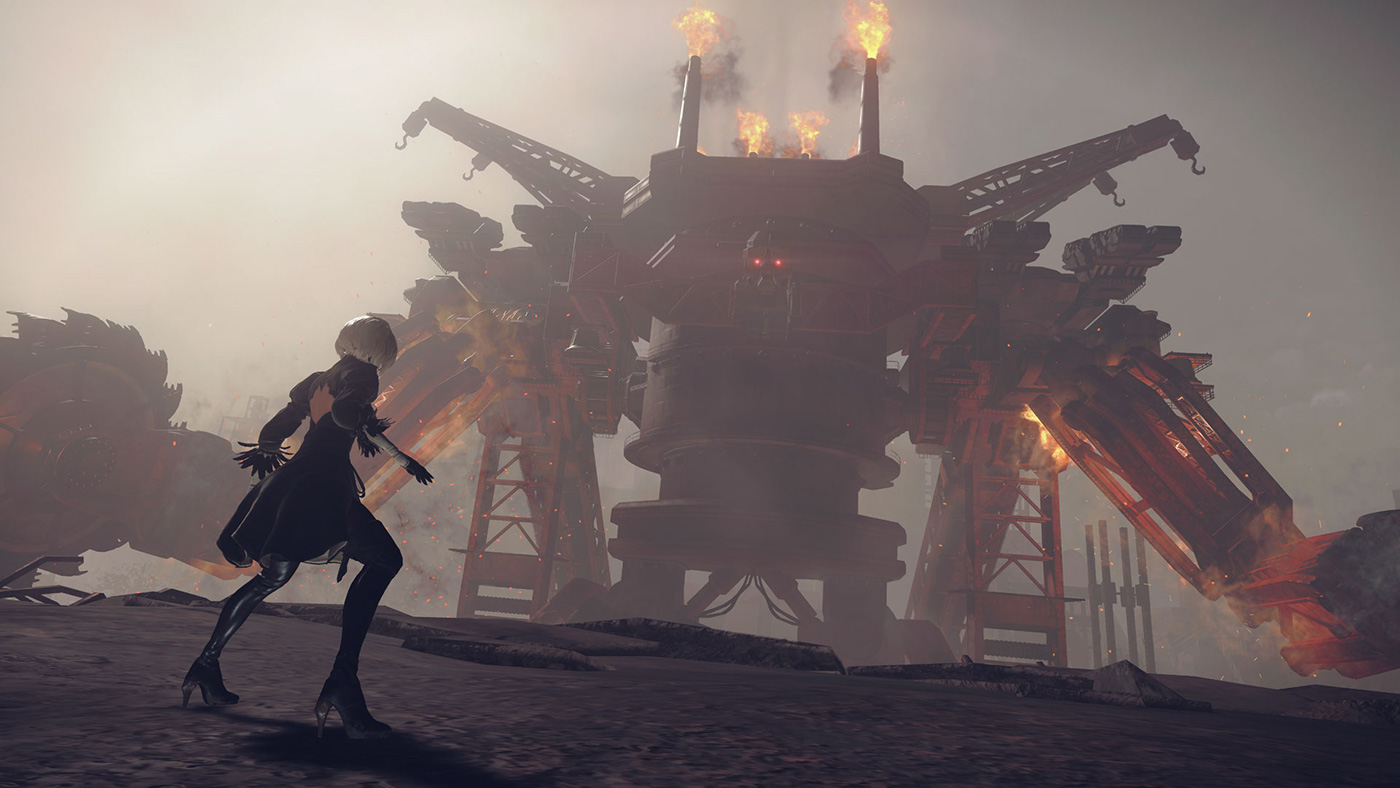 2017 will certainly be a year to remember. I came back to PC gaming. I started doing a podcast with Justin and the great cast at Horrible Night on a weekly basis. I played so so many games. During a hard period of time for me and my family, gaming really came through, providing great times with friends and distractions when I really needed it, not to mention some of the best games I have ever played. I can only hope that I see a year as good as this one, with so many great stories and characters and moments, in the years to come.

For more memorable games, check out the Games of 2017 which lead the way towards The 2017 Grimmys - Horrible Night's Games of the Year Awards.